Diplomatic relations between India and Maldives seems more ameliorated from the last two years. Exactly two years ago when Maldives was grabbed by a formidable water crisis following a mammoth brunt the generator of its largest water treatment plant in capital Male. 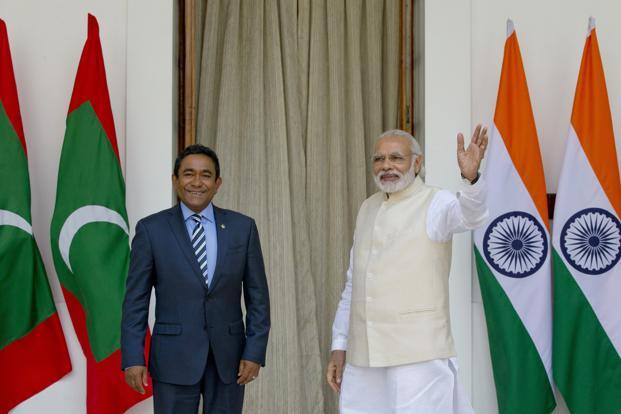 On the wintry night of December 2015, then Maldives foreign minister Dunya Maumoon did emergency phone calls to several of her ally nations including India, USA, Sri Lanka and China and beseeching them to defend from acute water crisis. By the effect of this tremendous water crisis approximately 1.5 lakh residents of Male, the capital city of Maldives had gone water-less and people of it became unruly to stand in lines for potable water.
India’s External Affair Minister Sushma Swaraj took the prompt action on distress call of Maldives’s MEA and sent five planeloads of drinking water by the Indian Air Force in Male and a huge ferment was prevented.
China’s Diplomatic Larceny
Now, Maldives conformation of a Free Trade Agreement (FTA) with China in total furtive way. The negotiations were going since 2014 between China and Maldives.
On November 29, President Abdulla Yameen’s government brought a Bill in Maldives’ Majlis (parliament), which ratified it at midnight. The approval of bill was made even without having requisite in the 85-member Majlis.
While bill was approved only 33 members of ruling coalition were present in the Majlis opposition shouted over the bill by saying it take only 10 minutes to read the files of around 1000 pages.
A week later, on December 7 – when Indian government was cynosure on Nepal parliamentary elections, Maldives President Yameen made his maiden visit to Beijing and signed the FTA with China. India was so much startled with the move that it took about a week before it could air its concerns over the matter.
India was among the first to recognize Maldives after its independence in 1965 and to establish diplomatic relations with the country. India substantiated its mission at Male in 1972. India has clamped down a few rebellions against the ruling coalitions in Male.
However, by Maldives seems to be giving more priority to China over India. Recently, Maldives fisheries minister Mohamed Shainee, during his Colombo visit, expressed dejection over the way FTA with India has worked. Under such circumstances, China did a sort of diplomatic coup in Maldives by getting it sign FTA without India having faintest of idea.
Why should India be concerned?
Maldives is the second country in India’s neighborhood where China has been successful to signing the FTA. After Pakistan, Maldives is second country to have signed FTA with China.
Nepal has now elected a pro-Chinese Left bloc government. Parliamentary elections are are going to happen in Bangladesh in about a year’s time when pro-India Sheikh Hasina will be fighting to beat two-term anti-incumbency against anti-India Khalida Zia’s party.
In Sri Lanka, China has increased its strategic stake by acquiring Hambantotal port on lease for 99 years. With its Belt and Road Initiative, China is further ramping up its economic ties with South Asian countries. Its massive economy seems to be dictating the new terms of engagement.